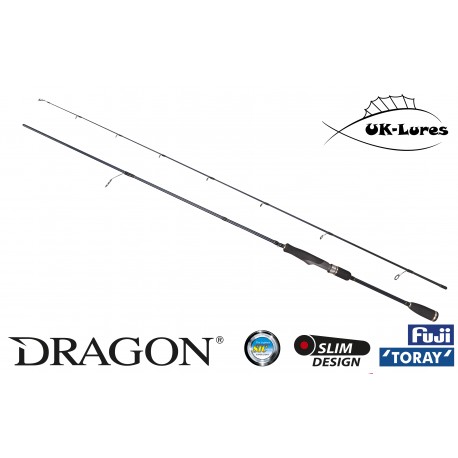 Unavailable /no amount of/

NanoLITE XT80C spinning rods are constructed from the newest graphite prepregs by the Japanese Toray company – from carbon fibers with very precise molecular structure. maller particles of carbon of such a mat allow to decrease the thickness, while maintaining all the operating parameters.

As main assumption we took:
- medium fast action;
- strong, progressive curve of blank under the load, which guarantee the certain, comfortable fight and the high percent of landed fish;
- the blanks of the walls of the standard thickness, but smaller outside diameter;
- the easiness of casting with extremely light lures;
- above – standard sensitivity of the tip.

Thanks to the usage of nanotechnology the blanks from this series:
- have smaller diameter;
- weight less than those with similar strength and length “traditional” blanks;
- their individual layers adhere to each other more precisely
- they contain less epoxy resin, without using the CGT production technology;
- they are more repeatable in the mass-production;
- less likely to contain hidden defects;
- at low weights and fast action they are built from less stiff mats than similar “traditional” rods.
Very important constructional element is the tip, created in such way, that the vast majority of the people who were testing the rods got the impression that they have the rod with solid tip. In fact it is the hollow inside, but its construction has increased the sensitivity of the rod, what gives slightly different curve under the weight of the lure what indeed reminds the work of the spinning rods with hollow tip. The usage of ultralight guides in the titanium frames allows to gain incredible balance of rods and the feeling of huge comfort during fishing. NanoLITE series is orientated to fishing for smaller predators, such as perch, trout, chub or ide with very small or small lures. In NanoLiIte rods’ blanks given mats by the Japanese Toray company were used:
- 46 mln PSI hi – modulus graphite as a main construction;
- 36 mln PSI hi – modulus graphite in the outside layers;
- 30 mln PSI strength graphite in core and middle part of the blank.
Finishing components of the NanoLITE series are:
- titanium SiC guides with ultralight but very strong and flexible frames;
- IPS reel seat;
- the highest class EVA foam;
- two component , ageless, epoxy varnish;
- Gudebrod threads.